All of Pathway Connectivity’s DMX/Ethernet Gateways can receive data from multiple sources at the same time. Data is routed on a slot by slot basis using the free Pathport Manager software. When a port receives data from multiple consoles, it determines which value wins based on the configured Priority.

So what happens when the lower priority console, say the architectural controller, is in control and then the more important one, say the show console, comes online? Does the port jump immediately to the new value because it’s a higher priority? That value may be higher or lower than the first and the sudden transition could be startling and even downright dangerous in a theatre setting. That is why all the Pathway gateways offer crossfading between sources when priorities change.

To use crossfades when a slot (or say 512 slots) is driven by more than one source, you need to create a Custom Universe in Pathport Manager. Touch the Universe Editor tab at the top of the screen. 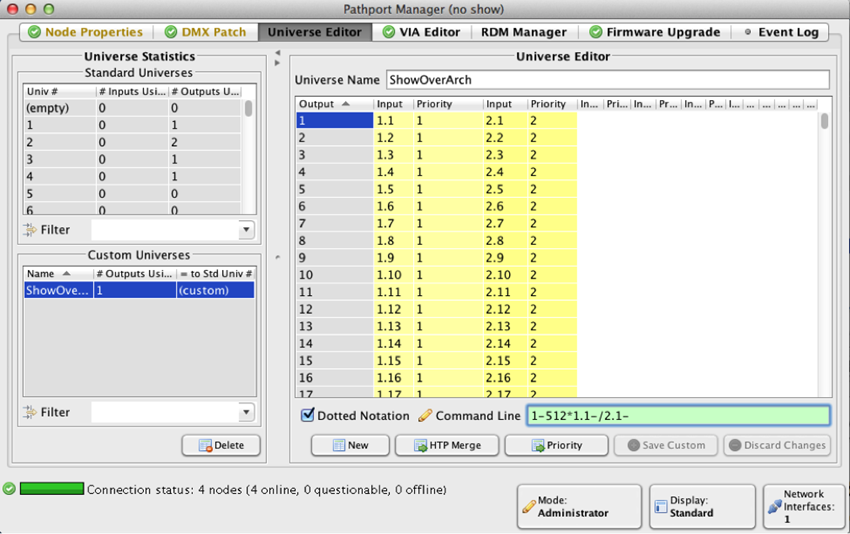 Create a “NEW” Custom Universe. I called this one ShowOverArch, meaning my Show Console’s source will win over my Architectural controller. Use either the table editor which works much like any spreadsheet or the command line. For example, type:

This sets every output slot of your new custom universe (1 thru 512) to accept a priority 1 input from stock universe 1 (i.e., 1.1 - 1.512), which comes from our lighting console in the booth. It also sets, as a priority 2, all of universe 2, from our architectural controller. The / symbol prioritizes the inputs. Inputs listed first, i.e. further left on the command line, are given higher priority. SAVE this custom universe.

Then choose the DMX Patch tab from the top of Pathport Manager and find your output port. In this case, I’m selecting Port A on Robert’s 1012.

Custom universes are shown at the top of the list when you choose New Univ. Select the Custom Universe you just saved. Touch SEND PATCHES TO PORTS to upload the new prioritized merge of Univ1 and Univ2 to that output port. 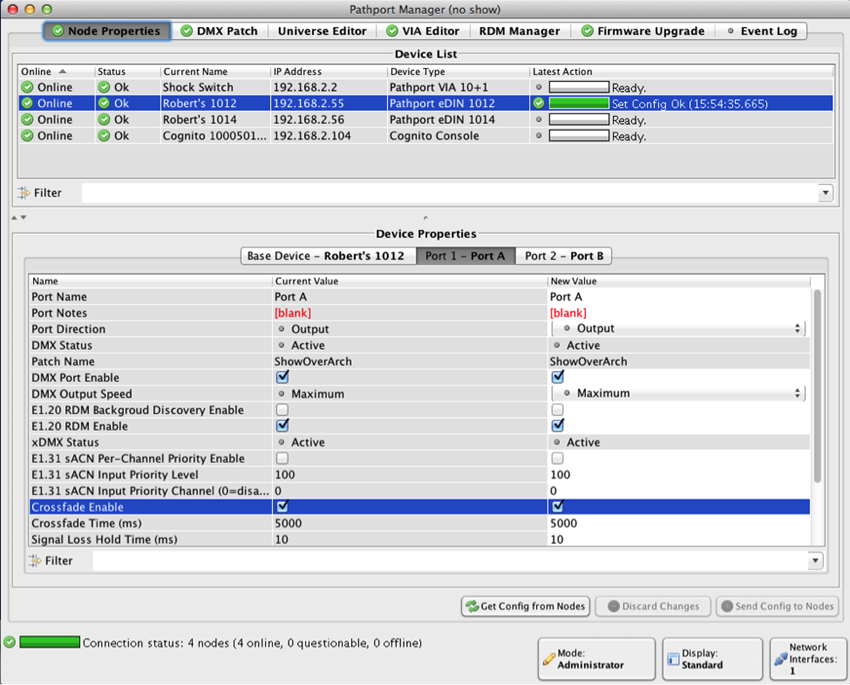 Select the appropriate Gateway (in this case Robert’s 1012) and then select the port using the Custom Universe (in this case Port 1 - Port A) and make sure ‘Crossfade Enable’ is checked. Change the Crossfade Time too if you want. The default is 5 seconds. When done, don’t forget to SEND CONFIG TO NODES.

p.s. When two sources have the same priority, the output level will be the highest of the two (HTP). This makes sense with intensities, but for attributes of moving lights, such as Pan, ‘highest’ is meaningless and you really need to figure out which source should win when active and give it a higher priority.