sACN or Streaming ACN, more correctly known as ANSI E1.31, is a mulitcast protocol that is much easier on your network than Artnet or Pathport. sACN has the added bonus of tagging each virtual port with a priority. Priorities go from 1 to 200, where 200 is the most important. So, if you have two streams on Univ 1, but one has the default priority of 100 and the other has a priority of 150, the second stream will win. If they both have the same priority, the streams will merge on an HTP (highest-takes-precedence) basis.

In many architectural situations where things don’t change that often, it is desirable to set the rules, upload them to the gateways and lock everything down. This can be done with any protocol we support. But occasionally you may want ‘on-they-fly’ priority swapping within the rig. An example might be an opening act sharing the stage with the headliners. Support groups often bring their own back line and sometimes even their own drum kit, but rarely (if ever) do they bring their own lighting rig. It’s up to the headliner’s LD to allocate them an appropriate amount of lights, but to keep most of the goodies for his bread and butter act. This is how a front of house riser diagram may look. 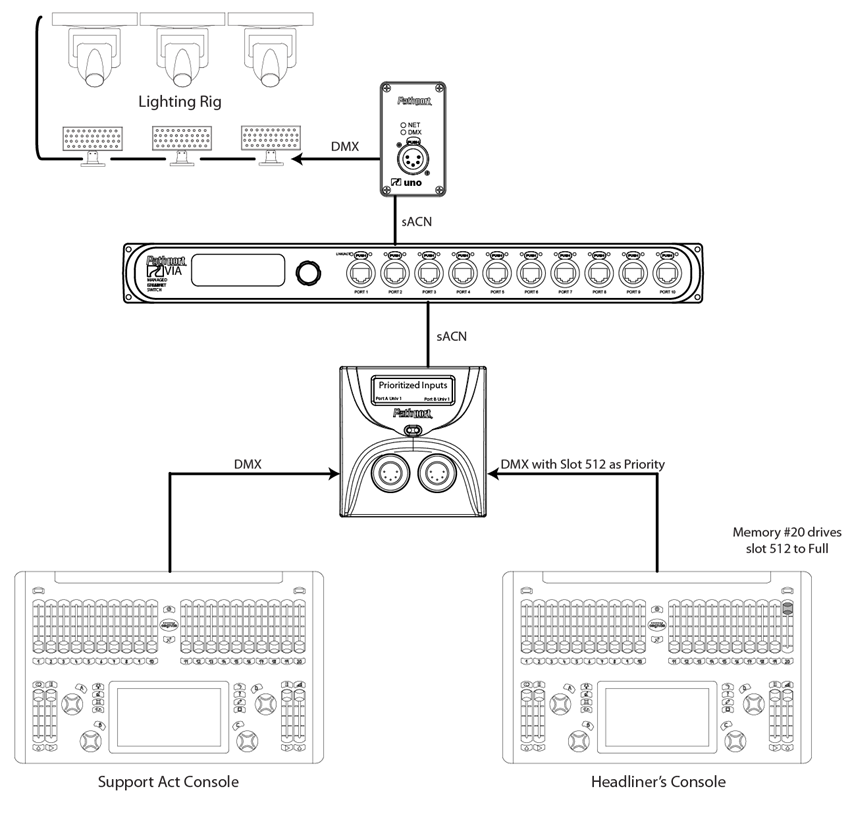 The ‘magic’ bit about this system is that both consoles can be on at the same time. If you set up a static priority system between the Support and Headliner’s consoles, if the Headliner console is on, and even if it is in Cue 0, it will win - the stage would be dark. A further complication, with moving lights and two consoles using an HTP merge, is that the lights will never tilt up in one direction from their home position because ‘home’ is typically a DMX value of 50%. Without Pathway’s sACN priority ‘swap-on-the-fly’, you’d resort to plugging and unplugging bits of the rig. This can lead to flickering on stage or worse yet, erroneous patching of entire universes.

In the above riser, both desks can have almost identical show files. Clearly, the Headliner might unpatch his super cool strobes and multicolored cyc lights, but most importantly, the Headliner’s console is plugged into Port B and the gateway is monitoring the level of Slot 512. Port A is set up to have the default Input Priority of 100, with the Input Priority channel set to zero (disabled), whereas Port B has a base Input Priority of 50, and slot 512 is configured to be the magic Input Priority Channel, for its sACN priority.

In this setup, both the A and the B ports are inputs transmitting sACN on universe 1. The same universe should be set for all DMX sources that you wish to switch between. Make sure that the Headliner’s input port (in this case Port B) has a lower “E1.31 sACN Input Priority Level” to begin with (shown here as 50). The other port (Port A) is still using the default of 100. Also set “E1.31 sACN Input Priority Channel” to be non-zero somewhere clear of your lighting rig (shown here as slot 512). If you wish to leapfrog sources, or move back and forth between sources, then all source should be set to the same Input Priority Channel.

The Output gateway must have the global “sACN Input Priority” property set to ‘Enabled’, and be receiving sACN on the same universe used by the inputs. When the output port sees the two streams coming from the FOH gateway, it arbitrates between them and the one with the higher DMX level on the ‘magic channel’ wins. So, in the example above, once the opening act is finished, the Headliner’s LD simply runs channel 512 up to full, using Memory 20, to take all control of the rig away from the Support Act Console.

If you have crossfades turned on at the Output gateway, the transition between the two sources is subtle; no surprises on stage. You can set the Output Port property called “Crossfade Time” to determine how long the switch over between the two consoles will be.

To learn more about sACN and how it works well with Pathway’s Via Switch, check out this video: